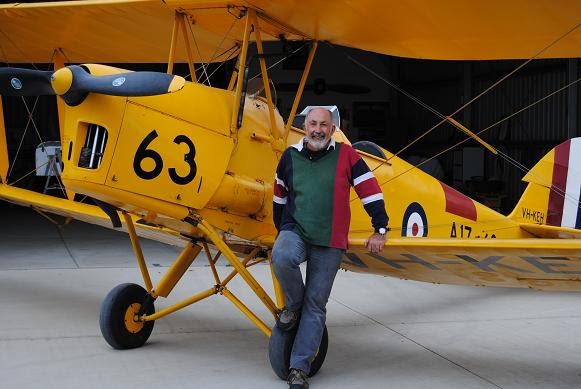 The Geelong Aero and Gliding Club was first formed in 1914 and is believed to be the oldest Aero club in Australia. The Club was based on the Belmont Common on what was then known as the ‘Geelong Aerodrome’. Not long after its formation the Club was conducting flying lessons and membership, considered very prestigious at the time, was reported as a healthy 130. After the 1914-18 War, membership numbers decreased due to the relatively high cost of flying and because a number of accidents depleted the Club’s available training aircraft. Unfortunately, we do not have any record of the first types of aircraft used for training, or who the flying instructors were.

During the 1920s and 30s many famous aviators visited the site. These included Captain Bert Hinkler, Amy Johnson and Charles Kingsford-Smith, the latter providing joy flights for locals.

The Club folded sometime in the 1930s and it was not until after WWII that the Club reformed in 1946-48 under the leadership of Wing Commander John Meehan. The Club’s first aircraft consisted of a Ryan Trainer and two De Havilland Tiger Moths. Many Geelong identities became involved but unfortunately the revival was short lived and once again economics forced the Club to close its doors and it remained inactive until its re-birth in 1978.

The Belmont Common continued to be used as an airfield albeit on a small scale until the mid 1960s when building development in the area put an end to its operational viability.

The Club was resurrected in 1978 at Connewarre on a site then known as ‘Polley’s Paddock’ or ‘Polley’s Field’, but now known as the Barwon Heads Airport. In the 1980’s the Club purchased the former Presbyterian church on the corner of Barwon Heads Road and Stacys Road and established the present Clubrooms next to the Airport. Following a lot of work over the years the Club is firmly established along with a facility that offers members a comfortable and relaxed amenity. However, building maintenance and upkeep remains an on-going demand and is carried out as finances permit.

The Club caters for pilots, aircraft owners and anyone with an interest in aviation. Flying activities have included hosting the ‘The Great Air Rally’ of 2005, participation in the International Avalon Airshow, running the annual Fun Flight event for disadvantaged children and ‘fly away weekends’ to such places as Echuca, Temora and Kangaroo Island. The Club also has an active social component. The membership has fluctuated over recent years from around 100 at its peak to approximately 25 at present.

Over the last few years Club projects have included construction of a Club Hangar, the rebuilding of a Skyfox aircraft and the purchase of the Jabiru 170C. The intention is to return the Skyfox to a condition suitable for sale with the proceeds contributing to the purchase of the Jabiru. The Jabiru will be available for hire to Club members and be the basis of a RAA flying school.

Aviation has a strong and exciting future, not only in the traditional sense but in ways that were unimaginable a few years ago (think RAA, drones, electric aircraft, autonomous aircraft) and the GAC intends to part of that future.